Mary Lanham’s assisted living complex in Florida tested all residents for COVID-19 — once in March and again in April — even though no one showed symptoms.

The preventive measure put her daughter’s mind at ease, since testing can detect the invisible enemy before it sickens, kills and spreads.

“We’re all struggling with this virus right now,” said Paula Lanham Hahn, whose 80-year-old mom lives at Dayspring Senior Living in Hilliard, a town near the Georgia border. “I’m sure families would feel a lot better if the residents were being tested everywhere.”

At a nursing home across town, residents were tested for the coronavirus only after cases broke out. At another nearby facility, residents haven’t been tested.

On Monday,  the White House recommended all nursing home residents and staff members be tested over the next two weeks. Testing thus far, though, has been arbitrary.

As the coronavirus has raced through long-term care centers and killed thousands of America’s most vulnerable seniors, testing has varied widely across facilities, even within the same states and communities. There’s still no federal mandate to test, although President Donald Trump said he’d consider one. Rules about testing, and public reporting of results, differ from state to state and by type of facility. Shortages of test kits linger, and there’s no uniform standard on which entity should do the testing or how often.

Advocates for seniors say all of this is unacceptable. It leaves families fearing for their loved ones’ lives.

“We really need to be testing all the residents and staff in these facilities. They are petri dishes,” said Brian Lee, who leads the Families for Better Care advocacy group in Austin, Texas. “The bodies are still piling up. These are our parents and grandparents. They’re not a disposable generation.”

At least 27,700 residents and workers at long-term care facilities have died from the coronavirus, according to a New York Times database.

Yet until May 3, the Centers for Disease Control and Prevention didn’t place long-term care residents, even those with symptoms of COVID-19, into the highest priority group for testing. Hospitalized patients and health care workers with symptoms came first.

It wasn’t until April 19 that the federal government began requiring nursing homes to report cases of COVID-19 to the CDC, plus notify residents and families about them. The Centers for Medicare & Medicaid Services has said it expects to post the information weekly by the end of May. But that rule doesn’t apply to assisted living facilities, because they don’t face federal oversight.

A Kaiser Family Foundation analysis said it’s unclear how comparable the nursing home data will be across states. Researchers pointed to wide variation among the 39 states that have reported data. (KHN is an editorially independent program of the foundation.)

“Together, transparency and testing are the solution. They go hand in hand,” Lee said. “But there’s no consistent policy approach.”

Douglas Adkins, executive director of the 32-bed Dayspring, said he wasn’t going to wait for directions from Florida health officials to test residents who developed fevers or started coughing. He wanted to find asymptomatic infections.

“You’ve got to get ahead of this,” he said. “I’m hunting the virus instead of letting it hunt us.”

Adkins hired a South Florida company to test residents on March 10 and April 21, with residents’ insurance paying for the $65 tests. All of those were negative. He plans ongoing testing of residents and also requires all new workers to be tested before starting employment.

A 10-minute drive away, a few cases of COVID-19 had already arisen at Life Care Center of Hilliard by the time residents there got tested. Les Hester, interim executive director at the nursing home, said in an emailed statement that health department workers in Nassau County helped with the tests. Nine came back positive, five among residents and four among employees. Lester wrote that they had put more than 50 residents in isolation to reduce the chance of an outbreak. He called residents “our highest priority.”

About a half-hour away in Jacksonville, administrators at the River Garden Hebrew Home for the Aged have been unable to get tests for residents of the 180-bed skilled nursing facility.

Marty Goetz, CEO of River Garden Senior Services, which runs the home, said he would consider buying tests on the open market, but he’d need help differentiating among the various types of tests, finding them and giving them to such a large number of residents. “It’s like the wild, wild West out there,” he said.

In the meantime, he has put in place infection-control measures such as locking down the campus, requiring staff members to wear masks and not admitting new residents who haven’t been tested for COVID-19.

Ideally, Goetz said, he wants the state health department to test residents at the facility. He wrote to state officials in mid-April pleading his case.

“Many of us have been waiting patiently to hear that Public Health will be testing 100% of the nursing home and [assisted living facility] residents and staff, because that will be the only way to get ahead of the virus,” he wrote to state officials. “To date, all we have accomplished is chasing where the virus has been, not where it is headed.”

But Goetz said not testing across the board before cases have been found is “a little like sending the fire department after the house has burned down.”

Mary Lanham (left) and daughter Paula Lanham Hahn sit outside at Dayspring Senior Living in Hilliard, Florida. Dayspring tested residents for COVID-19 — once in March and again in April — even though no one had shown symptoms. (Courtesy of Paula Lanham Hahn) 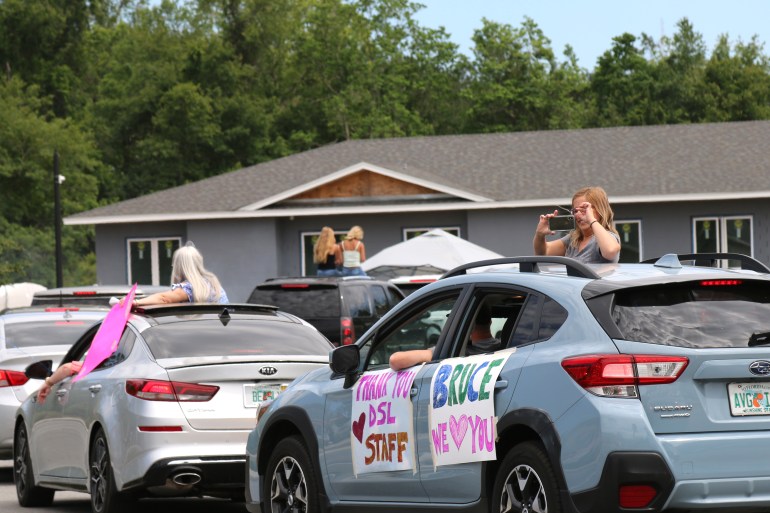 Family members participate in a socially distant parade in front of Dayspring Senior Living on May 8. (Courtesy of Douglas Adkins)

As deaths mount across the nation, the American Health Care Association, which represents more than 14,000 nursing homes, assisted living communities and other long-term care facilities, said it supports the White House recommendation on testing.

“What we need now is for state government leaders to help provide immediate and priority access to testing,” Mark Parkinson, president and CEO of the association, said in a statement Monday. “While universal testing in nursing homes is a good first step, it’s essential that testing, with rapid results, be widely available in forthcoming weeks. Testing will need to be repeated regularly.”

Dr. David Gifford, the association’s chief medical officer, said long-term care providers have been at the mercy of the CDC guidance, the availability of the kits, the doctors who order them and the labs that process them. “For months, we have been begging for priority and searching for labs or hospitals to perform tests for our residents and staff.”

Gifford said some facilities have taken it upon themselves to test, but that creates a financial burden for already stretched thin facilities. “Many nursing homes and assisted living providers are small, mom-and-pop operations in rural communities,” he said.

Private labs often don’t bill Medicare directly, he said, requiring providers to pay upfront for tests that can cost up to $400 each. His group is asking the federal government to create a $10 billion emergency relief fund to help pay for expedited testing and additional staffing.

Lee, of Families for Better Care, suggested that nursing home fines collected by federal officials in cases of abuse and neglect could pay for rapid testing machines costing about $4,500 each. Perhaps, he said, these could be shared with assisted living facilities, or nursing homes could become testing hubs.

Meanwhile, family members and advocates continue pushing for regular, universal testing and uniform reporting of results. Some states are starting to do this. Maryland, for example, recently began requiring all nursing home residents and staffers to be tested. The state lists the names of facilities with cases online, along with case and death counts.

In Texas, Republican Gov. Greg Abbott on Monday directed state agencies to test all residents and staff in nursing homes there. But the state doesn’t disclose the names of facilities with cases.

Cissy Sanders, whose 70-year-old mother lives at Riverside Nursing and Rehabilitation Center in Austin, said she pressed local and state officials to test after hearing of cases in the facility. A week later, a state representative told her Austin’s health department would test all staff members. Since then, she learned her mother was also tested. The result was negative.

On Tuesday, Sanders said her sister received a call from Regency saying the Texas National Guard would be coming to their mom’s nursing home to sanitize each room and test all residents and staff.

But Sanders said this measure is coming far too late, and she still worries for her mom and other seniors.

COVID-19 was found in a Washington state nursing home in February, she said. “Why wasn’t all this happening three months ago, after Kirkland, Washington?”