MONROVIA, Calif. — Most mornings, like clockwork, you could find Art Ballard pumping iron.

At least five days a week, he drove to Foothill Gym, where he beat on the punching bag, rode a stationary bike and worked his abs. After he joined the gym five years ago, he dropped 20 pounds, improved his balance and made friends.

At 91, he’s still spry and doesn’t take any medication other than an occasional Tylenol for aches and pains.

“Doctors love me,” he said.

But when California enacted a statewide stay-at-home order in mid-March, his near-daily physical exercise and social interactions abruptly ended.

Ballard’s health started to deteriorate: His back hurt, his legs cramped and he started becoming short of breath. As happens too often with older people, he also started to feel isolated and depressed.

“I was deeply concerned for myself because I didn’t have an exercise routine at home,” he said.

Art Ballard is proud that he doesn’t have to rely on several medications at his age. He takes only Tylenol as needed for aches and pains.(Heidi de Marco/KHN) 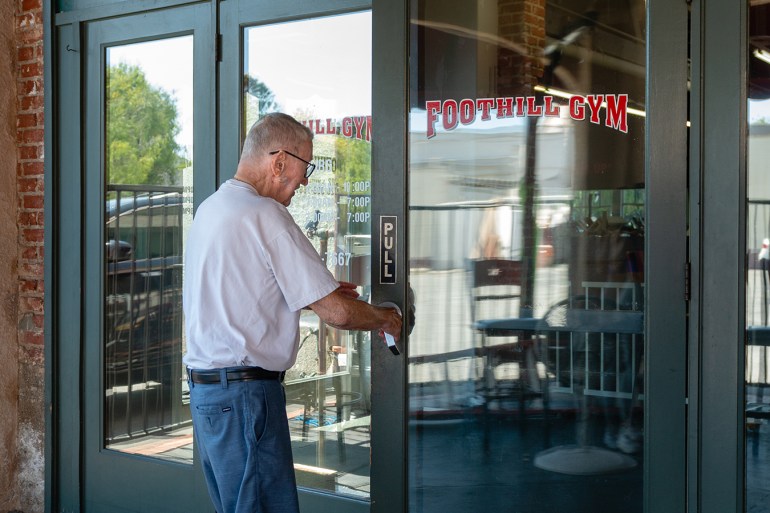 Art Ballard worked out at Foothill Gym a few weeks before it was officially open to the public. “I’m feeling so good,” he says. “I snapped back.”(Heidi de Marco/KHN)

The University of Southern California’s Dornsife Center for Economic and Social Research conducted an analysis in late March, as the coronavirus established a foothold in the U.S., that found that older adults over 60 who lived alone were more likely to report feeling anxious or depressed than those living with companions.

The combination of the pandemic and nationwide lockdown orders put this already vulnerable population at greater risk, said Julie Zissimopoulos, co-director of the aging and cognition program at USC’s Leonard D. Schaeffer Center for Health Policy & Economics. Social distancing measures have weakened the support systems that older people who live alone depend on for basic activities, such as help with grocery shopping and transportation to doctor appointments.

“There’s a huge, disproportionate impact on older adults with this virus and the health outcomes,” said Lisa Marsh Ryerson, president of AARP Foundation. “During this shutdown, we’ve had growing public health and community acknowledgement of how serious it can be to sever the ties with our network.”

Ballard, a retired jeweler, lives alone in a one-bedroom condo in Monrovia, a city of about 36,000 people about 20 miles northeast of downtown Los Angeles. He lost his wife of more than 50 years, Dorothy, to Alzheimer’s disease in 2015. Since then, he has embraced his solitude and reveled in his newfound bachelorhood. He enjoys cooking and trying out recipes, listening to 1950s music and watching YouTube videos about World War II.

Ballard holds a photograph of himself and his wife, Dorothy. She died from complications of Alzheimer’s disease almost five years ago. (Heidi de Marco/KHN)

He has a girlfriend he met online — a retired greyhound trainer who lives in Arkansas. They haven’t yet met in person.

Ballard felt he could handle the isolation of the lockdown order. He didn’t have visitors during quarantine, but his son, Dan Ballard, checked on him by phone weekly.

In the beginning, Ballard tried to keep busy. He did his shopping early in the morning and took strolls around his neighborhood. But after a couple of months of not visiting the gym, Ballard began feeling sad and frustrated, and his health started to slide. He relied more on his walker and sometimes struggled to breathe.

“My girlfriend was concerned with how I was thinking,” said Ballard, who speaks to her on the phone several times a day.

For Ballard, a self-proclaimed gym addict, Foothill Gym was a second home. Just as in the 1980s sitcom “Cheers,” it’s a place where everybody knows his name. Not going to the “club,” as he calls it, was taking a toll on his mental and physical health, so he decided to visit Brian Whelan, the owner of the small, family-run gym, in late May.

“He comes in, out of breath, with a walker,” Whelan recalled. “He couldn’t hold his head up straight and it took him five minutes to catch his breath.”

During the lockdown, Ballard started having difficulty keeping his balance. His solution was to walk around his neighborhood with a walker. (Heidi de Marco/KHN) 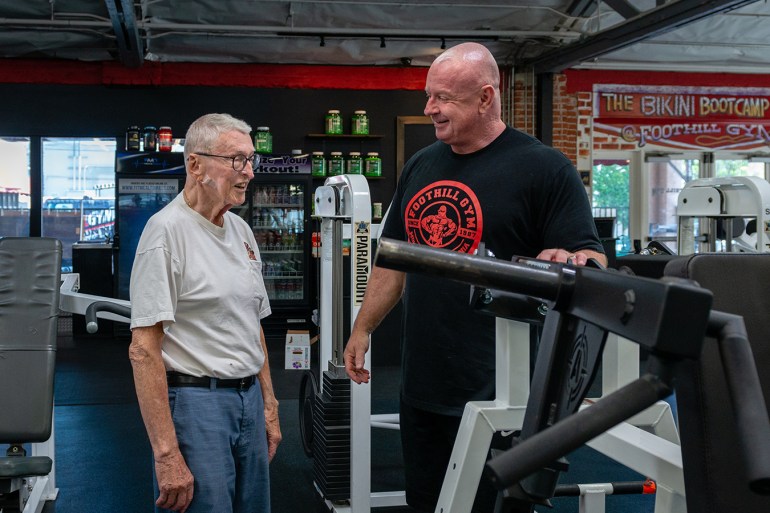 Art Ballard takes a break between sets to chat with Foothill Gym owner Brian Whelan on June 13. For Ballard, the benefits of the gym are twofold. “It’s the health factor and the social aspect,” he says. “Everybody there is so positive. It makes my day worthwhile.”(Heidi de Marco/KHN) 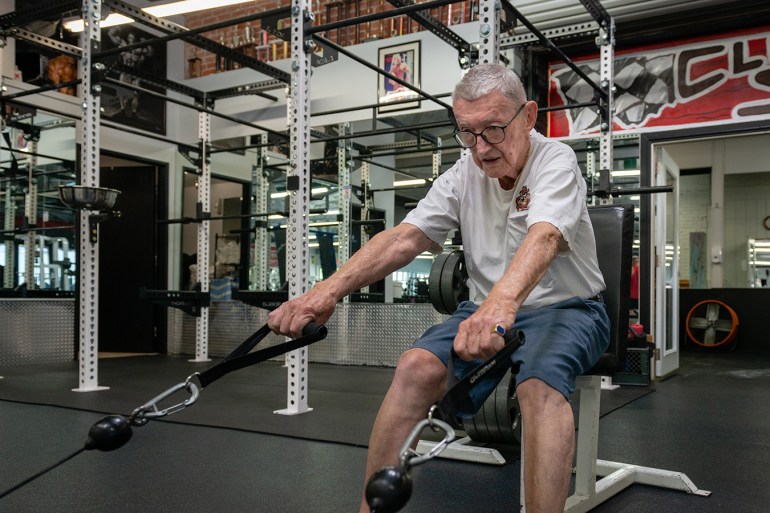 Art Ballard performs seated cable pulls during his total body workout at the gym. “I try to get my heart rate up to 140,” Ballard says.(Heidi de Marco/KHN)

Whelan felt sad and angry. “Everyone here was almost in tears because this vibrant man was gone,” he said. So Whelan broke the rules. He invited Ballard to visit the gym even before it officially reopened to the public.

Ballard resumed his beloved routine the last week of May, with the gym mostly to himself.

“Every day for the past two months, I’ve been sad,” Ballard said on the first day back. “Today, I woke up and I was happy.”

Day after day, Ballard improved. “Now he comes in without a walker, head up straight, and the spark in his eyes is getting brighter,” Whelan said.

Ballard says it took him a while to get his hands on a mask. He wears it when he goes grocery shopping and to doctor appointments. (Heidi de Marco/KHN) 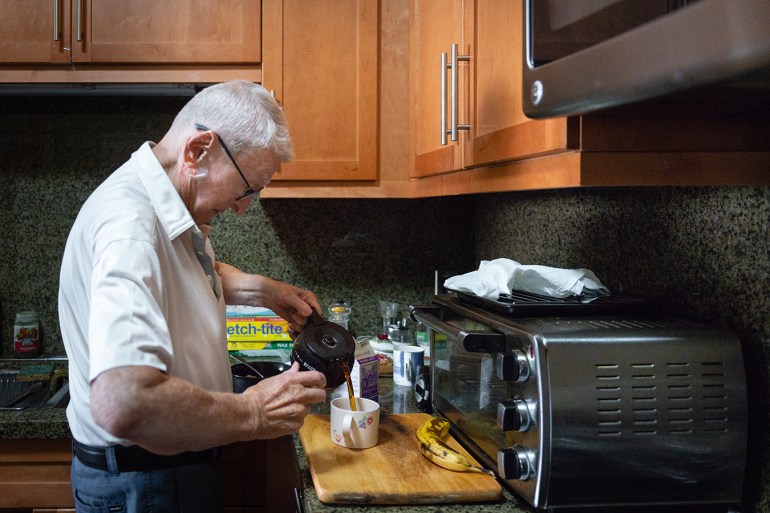 Art Ballard lives alone in a one-bedroom apartment. He’s self-sufficient and says he wants to live independently as long as possible. More than one-quarter of adults 65 and older live by themselves, according to 2018 U.S. Census Bureau statistics.(Heidi de Marco/KHN) 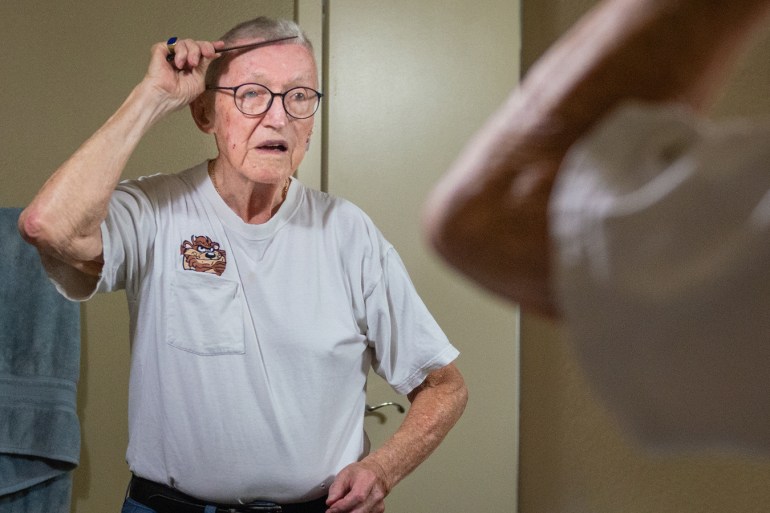 Art Ballard combs his freshly cut hair before heading to the gym. He has always had a crew cut, and the quarantine forced him, for the first time, to grow it out.(Heidi de Marco/KHN)

The gym reopened June 15. Despite the threat of COVID-19, Ballard is back to working out six days a week. Masks are required to enter the gym but can be removed when exercising.

Son Dan said he’s worried about his dad being around people, but realizes the benefits.

“It’s a scary balance. If he stops going to the gym and can’t see anybody, I know he’s going to deteriorate,” he said. “At the end of the day, it’s a quality-of-life decision that’s his to make.”

Ballard believes not being able to socialize was a bigger threat to his health than the risk of contracting the coronavirus.

“I found out how important my routine and exercise is,” said Ballard. “It’s given me back my life. And it’s only going to get better.”

Ballard always ends his gym session punching the heavy bag at least 60 times in a row, he says. “The most important thing to do is to shake those bones up, especially when you’re old,” he says. (Heidi de Marco/KHN)