INDIANAPOLIS — When Lamari Edwards joined Dreasjon “Sean” Reed’s Facebook Live video, she could sense something bad was going to happen, but she never thought she was witnessing the last moments of her friend’s life. “I had a bad feeling, but I did not think it would end this way,” said Edwards.

Reed’s video showed him driving at a high speed and narrating as officers from the Indianapolis Metropolitan Police Department chased him May 6. The officers said they observed Reed’s car driving recklessly, almost striking other vehicles.

In the video, Reed, 21, is seen stopping the car and getting out to run. Reed dropped to the ground after being tazed by an officer. The video does not show what happens next, but several gunshots can be heard.

The news of Reed’s death spread quickly. For many black Americans especially, his story seemed all too familiar: another black man killed by the police. When Edwards heard about a demonstration being held the next day in Reed’s honor in front of the Indianapolis City-County Building, she knew she had to go.

But like many of the 200 people who showed up, she wrestled with an additional concern: staying protected from the coronavirus. Marion County — which encompasses Indianapolis — has been under a stay-at-home order, set to lift Friday. It accounts for the highest number of confirmed coronavirus cases and deaths in the state with, as of Tuesday, 7,632 confirmed cases and 429 deaths. Current Marion County Public Health Department orders state that all residents should wear a face mask or covering in public and practice social distancing.

Practicing proper social distancing can be difficult during a mass protest. And, unlike during some protests, particularly demonstrations in several state capitals against lockdown orders, people here took precautions. Although protesters recognized the dangers of the coronavirus that come with assembling in close quarters, they said they felt the cause was more important.

That’s partly because Indianapolis is no stranger to violence. In 2020, police have opened 52 criminal homicide investigations. This number does not include accidental or self-defense shootings. Moreover, police were also involved in two other deaths, in unrelated incidents, within eight hours of Reed’s death: One was a police shooting, and the other was traffic fatality in which an officer’s car struck a pregnant woman.

An estimated 200 people showed up for a May 7 demonstration in Dreasjon “Sean” Reed’s honor outside the Indianapolis City-County Building. (Tarena Lofton/Kaiser Health News) 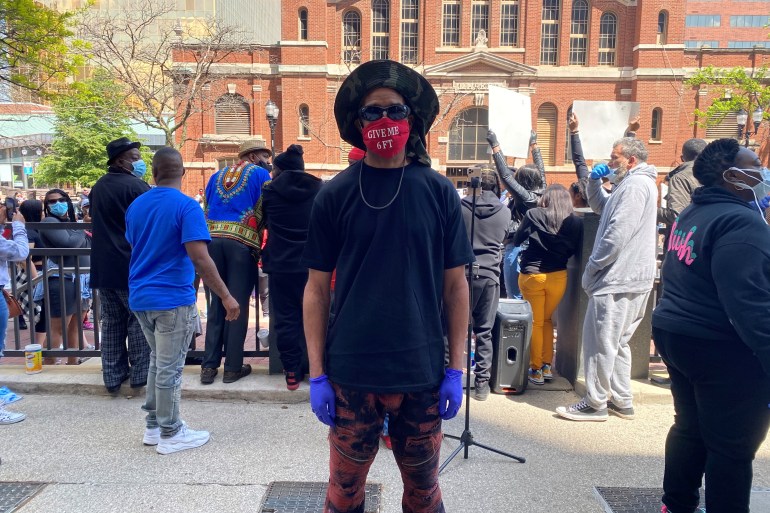 Anthoney Hampton, an organizer of the demonstration, is a forklift driver who has mentored inner-city youth in Indianapolis for 25 years. (Tarena Lofton/KHN)

Brandy Taylor, a 23-year-old cake decorator, said she decided to come to the demonstration partly because of her kids. She is concerned about their safety once the pandemic passes. She explained that it seems like the violence has slowed down since the start of the stay-at-home order, but she said, “You can’t keep people at home for forever.”

Anthoney Hampton, 50, an organizer of the demonstration, said he felt no hesitation. He felt it was his obligation. Hampton works as a forklift driver and has been a mentor to inner-city youth for 25 years. As a father and grandfather, he wanted his family to know it is important to stand up for a cause you believe in. And he sees the problem as much bigger than the ones in Indianapolis.

“I changed my [Facebook] profile picture to the young man who got killed in Georgia [recently], and a few hours later, someone got killed in our backyard,” said Hampton.

The young man he was referring to is Ahmaud Arbery. Arbery was shot to death Feb. 23 while jogging in a neighborhood outside Brunswick, Georgia. A video of the shooting was posted online May 5, causing a national outcry. State officials took over the case and arrested two men and charged them with murder.

As in Indiana, Georgia residents protested the death, gathering outside the state Capitol, in the streets of the neighborhood where Arbery was killed and in other places around the state.

At the gathering here, Hampton took precautions against the coronavirus. He wore gloves and a red face mask that read “Give me 6 feet.” Like Hampton, many others in the crowd showed up with masks.

Members of the Indianapolis chapter of Black Lives Matter passed out masks for protection. The organization also posted on their Facebook and Twitter pages urging participants to practice social distancing and wear protective gear such as gloves and masks but to stay home if they were sick.

Mat Davis was one of those distributing masks and telling people the fight against the coronavirus was also important.

“I was terrified,” said Davis. “I was like ‘Please take this. You’re upset; I’m upset. Please cover your face up.’”